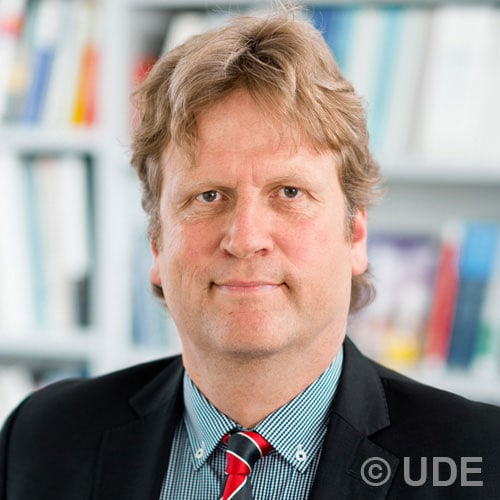 We are delighted to welcome Professor Belke for his course “Economics and Finance” today. We feel very proud that, after 14 years of teaching at our Europa-Institut, Professor Belke yet again has taken time out of his busy schedule to teach our MBA students important topics from the fields of economics and finance.

Prof. Dr. Ansgar Belke is a Full Professor of Macroeconomics and Director of the Institute of Business and Economic Studies (IBES) at the University of Duisburg-Essen. He has been (ad personam) Jean Monnet Professor since 2012.

Professor Belke is Visiting Professor at the Europa-Institut since 2007.

Moreover, he is an Associate Senior Research Fellow at the Centre for European Policy Studies (CEPS), Brussels; Senior Research Fellow at the Centre for Data Analytics for Finance and Macroeconomics (DAFM), King’s Business School, London; a member of the Adjunct Faculty at the Ruhr Graduate School in Economics (RGS Econ). Ansgar Belke has been a Visiting Researcher at the IMF in Washington, DC, CentER Tilburg, CEPS Brussels, IfW Kiel, DIW Berlin, and OeNB Vienna. Furthermore, he has been a member of the “Monetary Expert Panel” of the European Parliament, Research Director for International Macroeconomics at the German Institute for Economic Research (DIW Berlin), and a Visiting Professor at the Hertie School of Governance, Berlin.

He is President of the European Economics and Finance Society (EEFS) and is a member of the Scientific Advisory Council of IAW Tubingen, the Councils of “Arbeitskreis Europäische Integration” (AEI), the “Institut für Europäische Politik” (IEP), the Executive Committee of the International Atlantic Economic Society (IAES), and the Scientific Committee of the International Network for Economic Research (INFER). He is also a Research Fellow at IZA Bonn, the Global Labor Organization (GLO) and at CELSI, Bratislava; a member of the professional central bank watch group “ECB Observer”; a member of the Bureau of European Policy Analysis (BEPA) Visitors’ Programme of the European Commission; an external consultant to DG ECFIN of the European Commission; and an external consultant to the European Union Committee of the House of Lords (UK). He has conducted successful research projects on behalf of the German Bundesbank, the European Commision, the German Federal Ministry of Finance, and the German Ministry of Labour and Social Affairs, among other organizations. He served as a member of the “Monetary Expert Panel” of the European Parliament from 2009 to 2014. He obtained his BA and MA in Economics in Münster, Paris, and Kiel, and a PhD in Economics and Habilitation in Economics and Econometrics from the Ruhr University Bochum, Germany.

Professor Belke has published widely in international refereed journals and other outlets, makes regular appearances in the print media and in national and international television broadcasts. He is ranked 19th in the Handelsblatt’s most recent research ranking of more than 3,000 German-speaking economists. He is among the top 1% in the European Repec/Ideas ranking, and has h-indices of 22 (CitEc), 22 (Scopus) and 41 (Google Scholar). He has been the keynote lecturer at a wide array of conferences, among them the Blockchain Economic Forum (BEF) in Davos, Switzerland in 2019, the Koç University—TÜSİAD Economic Research Forum (ERF) Conference “EU Negotiations, Customs Union, and Economic Growth” in 2017, and at the “Greek Government Roundtable” in Athens, Greece in 2014. He was the plenary speaker at the ECOMOD Conference in Bali, hosted by the Bank of Indonesia, in 2014. He was the keynote speaker at the the “Asan Plenum” and “The Economist Bellwether Series Conference”, both in Seoul, South Korea in 2012, and at the “Jeddah Economic Forum” in Jeddah, Saudi-Arabia, the “Global Economic Forum” in Istanbul, Turkey, and the international conference “Policies for Growth and Financial Stability beyond the Crisis—The Scope for Global Cooperation” in Mumbai, India in 2010.

His main research interests are in the fields of international macroeconomics, monetary economics, European integration, and applied econometrics.

At the start of the twenty-first century, international aspects of economics and finance remain as important and controversial as ever. The objective of this course is to provide an up-to-date and understandable analytical framework for illuminating current events and bringing the excitement of inter­national and, especially, European economics and finance into the classroom. In analyzing both the real and the monetary sides of the subject, the approach of this module is to build up a simple unified frame-work for communicating the grand traditional insights as well as the newest findings and approaches. To help students grasp and retain the underlying logic of international economics and finance, the theoretical development is motivated at each stage by pertinent data or policy questions. Throughout the module, there is a special focus on European aspects and causes and consequences of the euro area debt and banking crisis.

Today in the “Saarbrücker Zeitung” – 30 years of “European Management”

70 Years of the European Institute